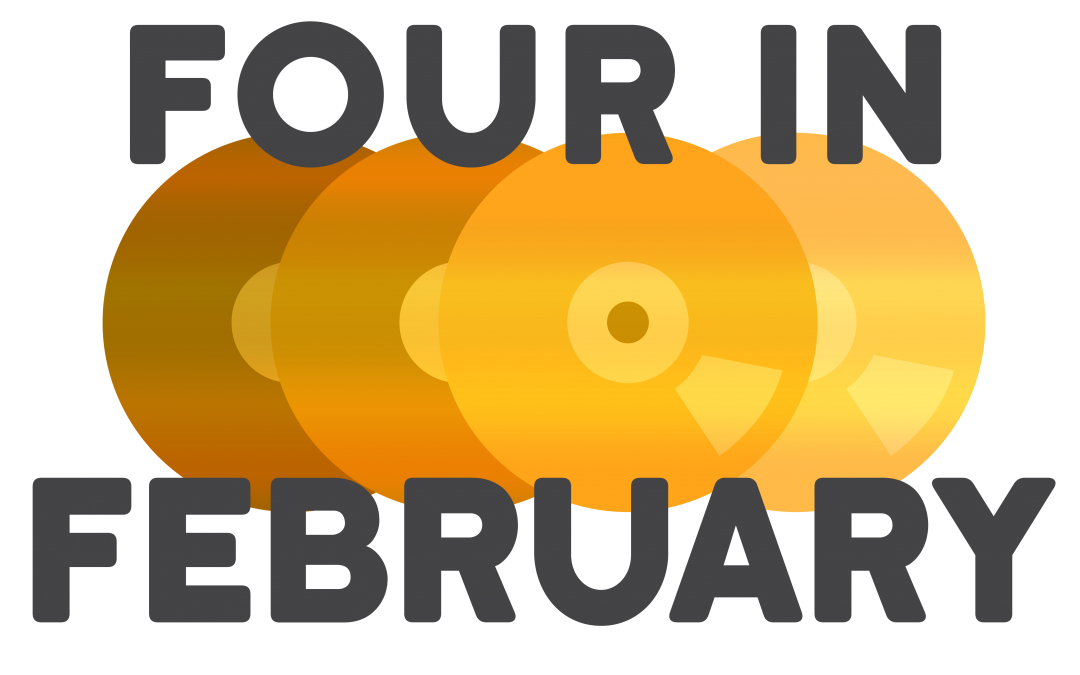 An annual tradition started by Mike Suszek while he was at the now-defunt Joystiq, Four in February is a challenge to just complete four video games during the month of February.

I’ve attempted it a couple of times before and came close. I’ve decided to try it again, because lately I’ve been starting a lot of games, but never finishing any. Check out my picks below! I also plan on streaming some of my attempt: I don’t know if I’ll be streaming on Twitch, YouTube, or Mixer (or even all three simultaneously), but you can follow me on those platforms to find out.

I picked up Marvel’s Spider-Man on Black Friday, but I just haven’t gotten more than a couple hours into it yet. It’s not that the game is un-enjoyable – it’s very good from what I’ve played so far! I just haven’t made the time for it yet, so that’s what I’m going to do – make the time to play it through in February. If I speed through it quickly enough, I might even try to do the DLCs as well!

Image and logo from PlayStation.com.

Update (Feb 2): I was right about it being very good! So good, that I completed the main story over the weekend! One game down, three to go. My progress will likely slow during the week, due to work, but I hope to get an hour or so of Pokemon in each night.

In what is a recurring theme for my Four in February picks, Hellblade: Senua’s Sacrifice is another one I just haven’t gotten to. By all accounts, it’s a beautiful, important, and well-acted game. The Game Awards trailer for Hellblade II was disturbingly great too. I can’t wait to put on my headphones for this one.

Image and logo from SteamGridDB.

I got The Outer Worlds free with my CPU when I built my new computer (I should write about that!), but I’ve only put an hour or so into it. I was worried about putting an Obsidian-developed RPG in my list, as they can take a while, but then I saw it’s actually a fairly short one – only about 12-15 hours or so! So it’s time to give this a proper go!

Image and logo from SteamGridDB. 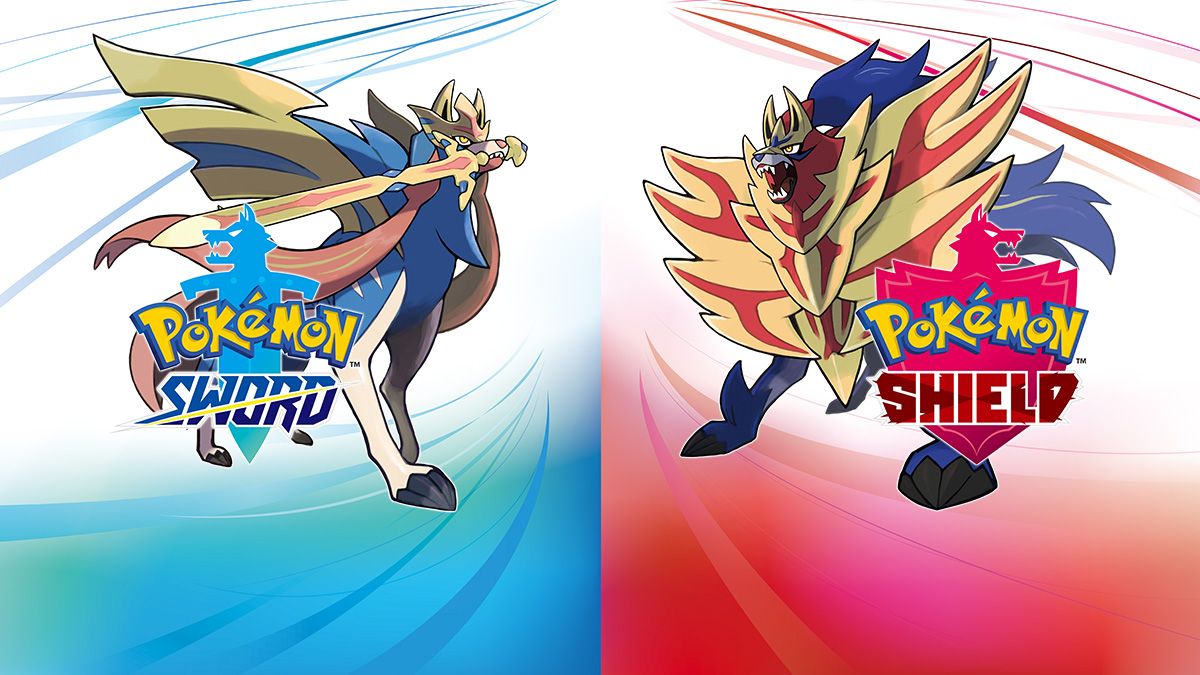 I bought Pokemon Sword on launch day, and I got Pokemon Shield for Christmas, but I’m only a couple gyms into Sword, and I haven’t even started Shield. I tend to start a new Pokemon game very excitedly, but then rarely actually complete it, so it’s time to change that. I don’t know if I’ll just continue my Sword save, or if I’ll start a new save file on Shield, but either way I want to get through it. This will be a good one to play in bed on my Switch, so I can just tackle it a little at a time.

Image from TechRadar’s review, and logos from Nintendo’s site.

I’ll try to stream as I play these games (except for Pokemon, since I don’t have a capture card), and Twitch will be the primary platform with the PS4’s integrated support!

I’ll also be simultaneously streaming to my YouTube channel, so you can watch there too!

I’ll probably be simulcasting to Mixer as well, at least for the PC games.

Long story short, I’m impatient. I don’t like it when I have to wait a long time for my computer to do things. That’s why I set out to build a computer this past December. In this post, I’ll share:

I had three goals in mind while building this computer:

That third one was what created the biggest problem: I owned CS6 for Mac. That meant one thing: I needed to build a Hackintosh.

Goals 1 and 2 work pretty well together: the venn diagram of things that make a good video editing machine and a good gaming rig has a pretty good cross section. That meant the starting point was to start with the hardest part (Hackintosh), and then get the others to work within the restraints presented by Hackintoshing.

One more thing: my goal was to stay right around the $1000 mark. The good news: I was buying the parts in November, which has some of the steepest discounts on computer parts all year.

Knowing that I’d have to work within the constraints of building a Hackintosh, I set out to find parts that work best with that. One of the most trusted and comprehensive sources of information on Hackintoshing is TonyMacX86. The best part is that they publish guides to the most compatible parts every month. The great thing is that Hackintoshing has come a long way and there’s a wide variety of parts you can use. That would be enough, except that those same parts are the best ones for video editing!

Long story short, I just selected the best parts within my budget limitations from the Tonymac list.

I used PC Part Picker to price out and plan the parts.

This was my first time building a computer, and it was a little scary. I was going very slowly when building it because I was so afraid of messing up. The number one thing I’d recommend to people building a computer for the first time is to prepare. Watch tutorials online. Read the manuals (seriously, they are necessary). Preparation is going to make your life much, much easier.

A Collection of Dark Premises

It’s time for an update on the short film I’m working on. I figure it’s time to share the premise.

“A student who hates his roommates must spend 6 hours trapped in a room with them during an emergency.”

Tim’s a college student who just wants to be left alone. He doesn’t really have a good reason to hate his roommates; he just really hates living with them. He’d rather be on his own. He doesn’t want to talk to them. I imagine in the kitchen he probably has a cabinet that the others aren’t even allowed to open up.

This post isn’t about that though. This is about the inspiration for the other part of that.

When I was 12, my family moved to Southeast Washington. Part of the TV market in that area was Umatilla, OR. Once in a while, there would be a little PSA on the local channels about what they should do in case of emergency. You see, Umatilla was home to one of the US’s stockpiles of chemical agents. There was a plan to incinerate them, but until that was completed just a few years ago, there was some serious danger.

If there was an incident, they would have had to shelter in place (quickly, I might add) and seal off the outside air coming in. So that was the inspiration for the premise. In fact, the characters largely follow the instructions given on Ready.gov for sheltering in place (though in reality they probably would have evacuated; sheltering in place like that is only good for a couple of hours).

Now I’m at college in Rexburg, Idaho. And wouldn’t you know it, I’m close to another place. Idaho National Laboratory in nearby Idaho Falls doesn’t pose the same kinds of danger (they mainly focus on energy research), but they’ve had incidents too. In fact, they were the site of a fatal nuclear accident in 1961 (the ones killed were personnel working on the reactor).

So put my college experience and the chemical accident premise together and you get this story!

Starting is the Hardest Part

That image above is a good summary of the hardest part of making a short film (which is just one of the things I’m doing in the next few months). Seeing a blinking cursor on screen is just so intimidating. Even though my ideas are always brewing in my head for a while before I actually start typing things out, that doesn’t make it much easier.

The weird thing is that once I start, things open up. The words just start flowing out of my fingertips when I actually start typing. But it takes a massive amount of effort to just get those first words onto the page. I’ve started though. I’ve got the draft of my short film’s script written, though there’s some stuff I’m not happy with yet about it.

Until I get it refined a little more, I’ll just leave the logline here:

A student who hates his roommates must spend 6 hours trapped in a room with them during an emergency. 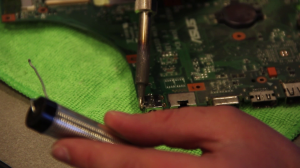 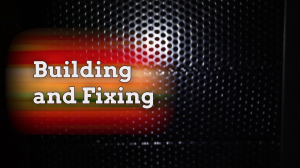 Time for a senior project! I’m synthesizing all my interests together by creating “Getting Started HTML,” a guide to learning the very basics of HTML and CSS for people who aren’t even aware what HTML or CSS are.

This arises out of my campus job from the last several semesters. I tutor for a class called “Creating Online Media,” which is a class to teach HTML and CSS to communication majors. These are people who are more familiar with Photoshop than a text editor. HTML may seem relatively simple to those of us with a background in technology, but it’s extremely hard to get into the correct mindset when you have never had to use anything but WYSIWYG tools. HTML and CSS are pretty abstract ways to create things: you’re turning text into design.

Basically, I want to make these things easier to understand. That will not be an easy task, but you can help if you want. I’ll be building text and video content over the next two months. I would love feedback along the way. Particularly, the written content is available online as I write it. So get in there and give me feedback!