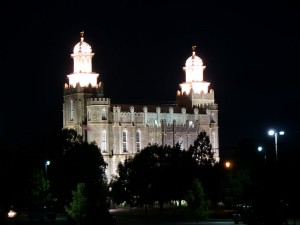 This is probably the photo I’m most proud of. The camera I took this with does not have manual settings, but it did have a night scene mode. This photo was taken from a second story landing at an apartment complex with a great view of the temple. I used the night scene mode to get this photo. The towers of the temple are kind of overexposed, but the rest of the temple is very bright and very detailed because of the stability that the railing provided, despite the long exposure time. 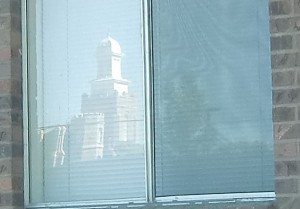 A couple of days later, I was at the same apartment complex and happened to notice the temple reflected in the window of one of the first floor apartments. I thought it looked interesting, and was surprised that I could see the temple because there were some trees that I thought would have blocked the view. Unfortunately, the photo is fairly low resolution because this is a crop of the original image. I can’t remember why I didn’t zoom in farther to take the photo originally. 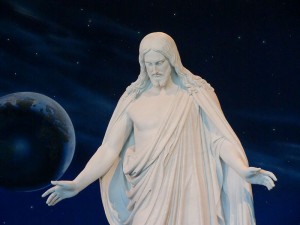 Yes, this is cliche, but I don’t take a whole lot of photos, so I don’t have a wide selection to choose from. I feel this is a fairly crisp photo though. Should have used the rule of thirds a little more though. 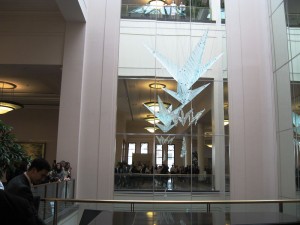 Again, I haven’t been a huge photo-taker. I had the opportunity to go to General Conference in April 2010. While walking around the Conference Center, I noticed what I can only assume is a strange hanging sculpture. Or something like that. I’m really not sure what it is. I probably didn’t realize it at the time, but I like how the sculptures kind of point in a line toward the center of the image. 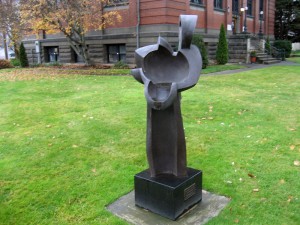 Remember when I said I didn’t take a lot of photographs? I really wasn’t kidding. I’m scraping the bottom of the barrel. I wish I had known about the rule of thirds when I took this. This is a statue in front of an art gallery back at home.