Despite the rapid growth of Twitter, many people still don’t have an understanding of what Twitter is and how it works. This guide seeks to correct that.

Or How the Big Bang Started

Twitter started out as a side project at a company called Obvious back in 2006. The original concept was an SMS-based social network, where messages could be posted via a single text message. The growth of Twitter began to take off as they showed the product off at the South by Southwest Interactive festival in Austin, Texas. They promoted the service with several televisions showing what people were saying on Twitter at the festival. Festivalgoers found Twitter helpful because it allowed them to keep track of what other people were doing during the festival, simply using their cell phones1. However, during this period of extremely rapid growth, they faced an extended period of service issues, with Twitter.com and the API, a way to use Twitter without going to the website, crashing often. Twitter eventually recovered from these service issues, and today grows at a more rapid pace than ever before. There are now around 200 million Twitter accounts2. Close to 500,000 new accounts are created every day, and 1 billion messages being sent every week3.

The core of Twitter is messages called tweets. Tweets are at most 140 characters long. Characters include not just letters and numbers, but spaces, punctuation, and symbols also. This limitation allows access to Twitter via single text messages, which was one of the original uses of the service. Messages sent to 40404 (in the US) are posted to the user’s account. People can also be sent text messages from 40404 containing the latest tweets from others. While it is possible to use Twitter via text messaging, the focus of Twitter has shifted more towards use via the Twitter website or a variety of computer and smart phone applications.

Following and Being Followed

Or How to Stalk Someone

Those you follow and your followers as seen on Twitter.com

The concept of “friends” works differently on Twitter than on other social networking sites. Instead, there are followers and people who follow you. If you follow someone, his or her tweets will show up in your timeline. If someone follows you, your tweets will show up in his or her timeline. The timeline is the first thing you see when you log in to Twitter.com; it is a collection of tweets from every user you follow arranged in reverse chronological order. If someone follows you, you do not automatically follow him or her; the relationship does not have to be mutual. However, it is courteous to follow those that follow you, unless there is some form of spamming involved.

Replies, Mentions, and the Art of Conversation 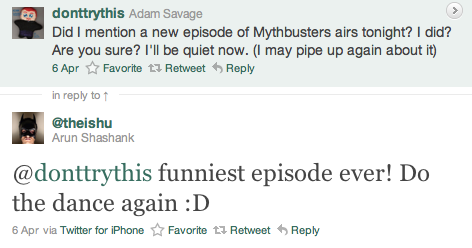 Twitter makes it relatively easy to have conversations with others. Using the @ symbol followed by a user’s username, you can “reply” to others’ tweets. For example, if UserA tweeted “having a bad day today,” you could, as UserB, reply to them by tweeting “@UserA what’s making your day bad?” This particular tweet would then show up in a more specialized timeline called @Mentions. Tweets mentioning you from anyone (whether you follow them or not) show up here, even if they are not a reply to a tweet you have made. So far, these tweets have been public, meaning they could be viewed by anyone on the Internet. If UserA didn’t want the reason he or she has had a bad day to be viewable by everyone, he or she could send UserB a direct message. Direct messages are private and only viewable by the recipient. Not every tweet on Twitter is part of a conversation; some tweets are just addressed to a general audience of followers and anyone else who might happen upon the tweet.

Or How to Find Stuff 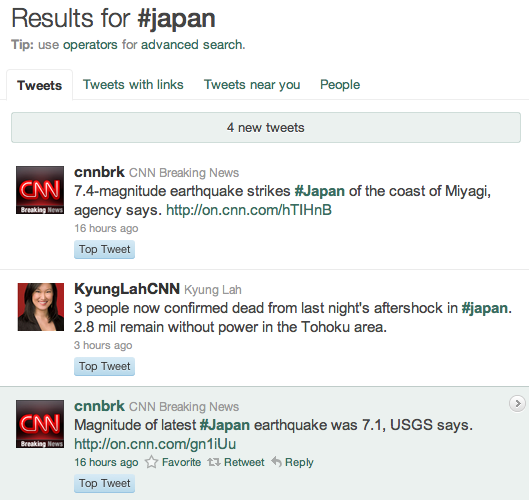 A search for tweets with the hashtag #japan.

With a billion tweets sent every week, it can be hard to find tweets on a particular subject. To address this problem, Twitter users introduced the hashtag, which was later adopted as an official feature of Twitter. By prefacing a word (or phrase with no spaces in it) with the # symbol it categorizes a tweet and makes it easier to find with other tweets on the same topic through the search feature. It also allows Twitter to determine which topics are being talked about the most at any given time. For example, the hashtag #egypt was very popular during the Egyptian revolution.

The last vital concept of Twitter is the retweet. Retweeting allows various tweets to go viral, not unlike extremely popular YouTube videos. There are two ways to retweet: by quoting a tweet (the original method created by the users themselves) or by clicking the retweet button (the simpler method introduced by Twitter). For example, if UserA tweets “check this crazy video out, it blew my mind! [link to video]” and you, UserB, wanted to retweet that message, you could do it one of two ways. You could tweet “RT @UserA check this crazy video out, it blew my mind! [link to video]” and then the tweet would show up in the timeline of your followers. This method also allows you to add your own statement at the beginning of the tweet, like “blew mine too! RT @UserA . . . ” The second method is to hit the retweet button. After confirming that you want to, the tweet will show up in my followers’ timelines exactly as you saw it, except with a small retweet symbol somewhere near the tweet followed by the words “by UserB.” Retweeting allows simple little tweets to go viral, and can lead to the person who originally tweeted gaining more followers.