I Don’t Have a Good Title For This

So I’ll be honest. I’ve never been very good at this whole “blogging” thing. I’m not really consistent with tweeting either. Or posting to Facebook. And I’m even worse about Google+. But I’m trying to change that a little bit. And I’m doing that a couple of ways.

Mostly, I want to be able to get my thoughts out there. Even if nobody reads them, I’m OK with that. I just want to write. And I’ll do it by using the experiences I have. Maybe I’ll write about things I’ve learned in classes! Maybe I’ll share some lessons I’ve learned from video shoots! Who knows!

Either way it should be good for me. Even if it’s like pulling teeth to write sometimes.

Life has been… complicated the last few weeks. Complicated is probably the best word for it. There’s lots of contention in my family now, but I feel I’ve learned a few things from all the troubles. I’ll summarize a few of the highlights below.

I’m still making plenty of mistakes right now, but I think I’m starting to learn from them. I think I’ve done more growing up (and acted more childish) in the last month than in many years, but I’m trying to make forward progress.

It’s Christmastime and I’m hoping it’s a good one for everyone. I have no big plans for my Christmas, but I know I’ll be using my early Christmas present a lot during the next few years: a nice shiny new 2TB external hard drive. I got it right after Thanksgiving and it has come in very handy! Now I have a backup of my computer and won’t lose the projects I’ve been working on.

So here’s a little present: the first photo in the dance pad project. This is just a before pic, so it’s nothing special, but I plan on slicing it open tomorrow (if I’m not too full from the delicious holiday food). Also, I’m painstakingly creating some step files for a few popular songs. It’s pretty time-consuming, but I finished my first one not too long ago. It felt pretty good to get it finished. 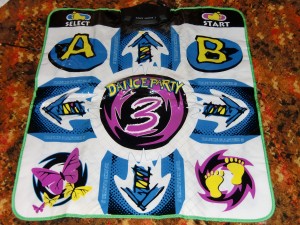 END_OF_DOCUMENT_TOKEN_TO_BE_REPLACED

The Break of No Responsibility

So now it’s Christmas break. The break is only two weeks, so there’s not time to get anything big going. Instead, I’m stuck with nothing to do. I do, however, have a few things I can do. The first is to get going on this blog. I need to get into some sort of groove. Most of my posts will probably be somewhat short. It’s easier to do that way. The second is a little more exciting.

A few months ago I was at Deseret Industries (a thrift store like Goodwill or… um… any other thrift store like that) and I found a couple of great finds. The first was an Xbox (the original) for $10 with a controller. This Xbox turned out to be an OK buy. The disk drive is broken, but somebody had soft-modded it, so it’s still good for something. The second great find was a “Dance Master 3” dance pad for $3. It isÂ a stupid “plug straight into the TV” game that tried to emulate DDR. After plugging it in and turning it on nothing happened. Another few tries showed nothing. The light was even on, but it simply didn’t work. Then I had the brilliant idea to change the 4 (yes 4!) AA batteries that it takes. I opened up the back of the little black box of the top that seemed to be its brain and stuck in the new batteries.

That was when I got to see the true awfulness of this little “Made for TV” game. The graphics and sound were of NES quality (maybe even slightly less, at least music-wise). The song selection consisted of… I don’t even know. Even if there were popular songs in there, the audio would have of such sub-par quality you wouldn’t have been able to recognize them. The difficulty level was completely laughable. It was only slightly harder than the tutorial level of Tap Tap Revenge (TTR3 would be a current addiction of mine if all the free songs didn’t suck).

It didn’t take long for me to decide that this dance pad needed a new life. A new life separated from its little black box of suckiness. The only problem: almost every tutorial online about making your own dance pad for use with Stepmania (amazing free software that copies DDR) tells you how to hook it up with the fantastically outdated kinds of ports that don’t exist in any computer that my friends and I would have. I need a USB solution. That’s going to be the challenge. The other challenge I have is that I’m using a Mac, which makes drivers a little harder to find. Provided I’ll need drivers. I don’t really know because I’m not sure where to start.

So that’s my challenge for this break: figure out how to make a USB device. I have a feeling I’ll be visiting Radio Shack a few times next week. The only thing I know is that the first step is to cut the thing open and break open the black box. After that, I’m at a loss.

I know I don’t have any readers yet, but if someone manages to stumble across this on the internet and has any hints or tips or knows where to find information, feel free to leave a comment. In fact, please leave a comment.