An annual tradition started by the now-defunt Joystiq, Four in February is a challenge to finally play a few of those games that we all just have lying around collecting (virtual) dust. The goal is to complete four games during the month of February.

I attempted it last year and came close. I successfully completed three games: Rise of The Tomb Raider, Far Cry 4, and Strong Bad’s Cool Game for Attractive People. I think I would have met the goal, had I not been sick for almost a week! I’m going to give it a try again this year. Check out my picks below! I also plan on streaming as much of my attempt as I can, so I’ll update the information below with archives of the streams as well!

Yeah, season 3 just came out. I’m a season behind, which is all the more reason to fire up season 2 and play it! I “enjoyed” season 1 (as much as you can enjoy a story like that), so I don’t know why I haven’t gotten around to playing season 2 yet. I recently picked it up when it was free through Twitch Prime though, so there’s no more excuses. It’s time to enter this tough and depressing world again.

Brothers: A Tale of Two Sons

This is a short one. I’ve heard it only takes one sitting to complete, but I’ve also heard nothing but good things about it. This is one that’s been sitting in my library for quite some time, but I just haven’t taken the time to play it. I’m going to finally fix that.

I’ve actually played about 4 hours of Darksiders II before, but then I just never came back to it. I remember thinking that it scratched the same sort of itch that the Legend of Zelda series did for me, so I think it’s time to give it another go. I’ll be starting over since I don’t really remember anything about the story or how to play the game, plus I’ll be playing on the newer Deathinitive Edition as it will hopefully be a little more compatible with Windows 10 than the older version. This one’s my long pick, as I expect it will take up to two weeks to complete.

OK, clearly I need to buy and play Undertale, because I don't understand any of this story. #AGDQ2017

That is why Undertale is my final pick for Four in February. I attended AGDQ 2017 a few weeks ago and was in the room for the Undertale run; the finale of the marathon. It looked pretty good, but when you’re skipping so much stuff, you don’t get a good sense of the story. So it’s time to play this game. I don’t even own it yet; I’m going to buy it specifically for this.

I’ll be streaming as much as possible while playing these games, so watch on my Twitch channel!

I’ll also be simultaneously streaming to my YouTube Gaming channel, so you can watch there too! 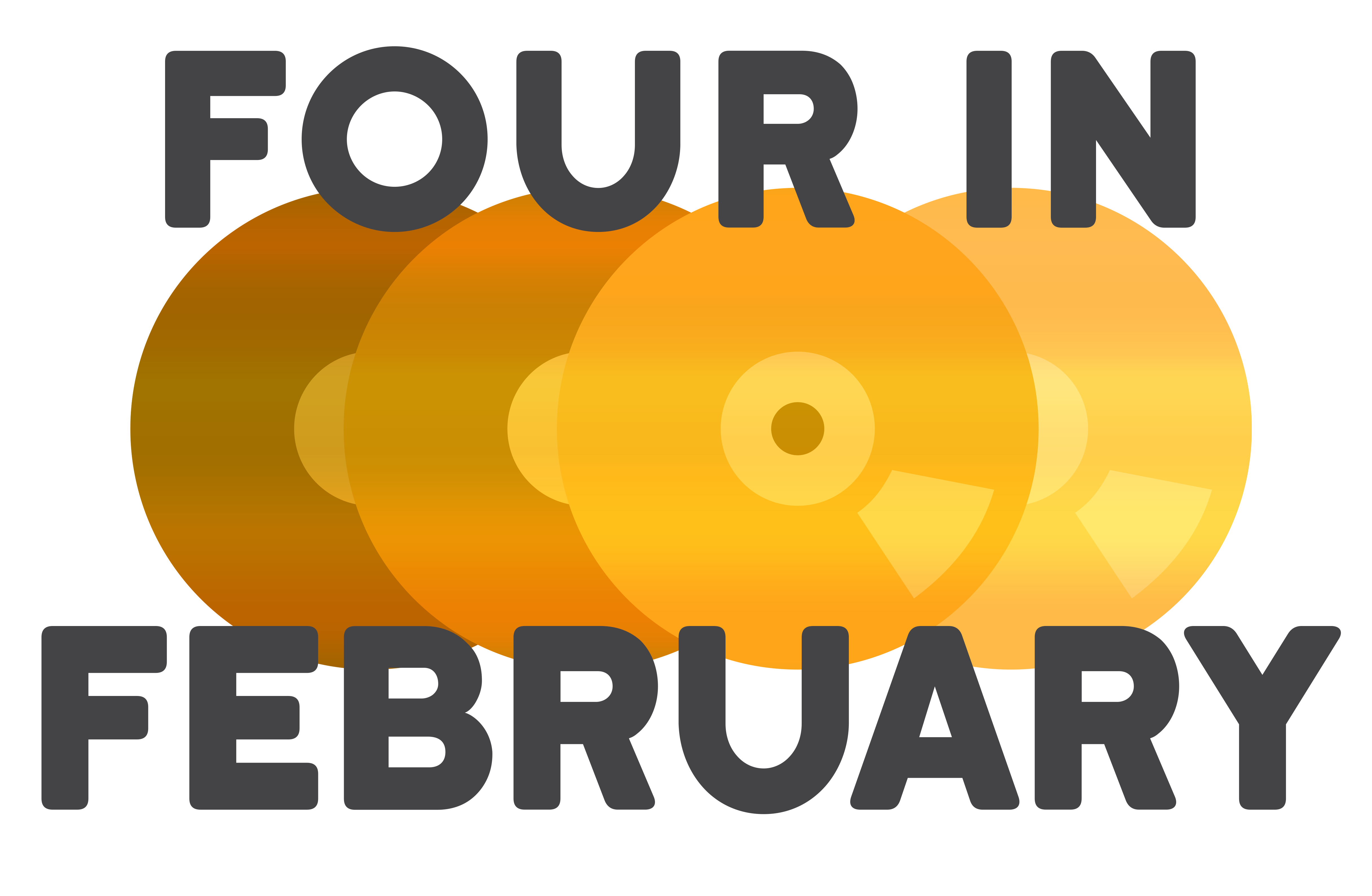 I haven’t been playing very many video games lately. Sure, I got sucked into Fallout 4 for about 40 hours, but then a whole lot of nothing. It’s time to break out of that. It’s time to actually play a few of the (very) many games that are lying untouched in my library.

4 in February is a yearly event, started by (the now defunct) Joystiq, challenging people to complete four unplayed video games during the month of February. The idea isn’t to go buy four new games, but to make it through four that you already have, but haven’t gotten around to.

With that in mind, it’s time to tackle a little of my backlog. Here’s my 4 in February.

Rise of the Tomb Raider

Conveniently, Rise of the Tomb Raider makes its way onto PC on January 28th, just a few days before the start of February. Given just how much I love the Tomb Raider reboot (I’ve played through it twice), it’s no surprise that I want this one on my list to beat in February.

It’ll be very nice to look at as well – this Christmas I upgraded my PC with a new GTX 970, and that’s the card for the recommended spec!

That wasn’t quite as long as I expected. It only took about 12 hours to complete, and I powered through it in just 3 days. I streamed the whole thing – check out the recordings to the left!

Just Cause 3 just came out, but I think I’m going to wait for that to go on a better sale. In the meantime, Just Cause 2 is languishing in my Steam library, not even 2 hours played. I don’t remember much from the brief time I’ve already spent with the game, just that I think it was fun, and that it sure looks like it’ll be a lot more fun when I dedicate a proper amount of time to it.

Remember that great website HomestarRunner.com? The one that’s showing signs of coming back to life? Well, back in 2008 they partnered with Telltale Games to make a series of point-and-click adventures! This was back before Telltale’s games were basically just dialog trees and tough moral choices – they were legit point-and-clicks. I did play most of the first episode at one point, but there’s no way I remember how to do it at this point. It’s broken into 5 episodes, so I think I’ll just play one all the way through each night till I finish it.

This is actually a sequel to the studio’s previous game Ben There, Dan That, but I won’t play that one first unless I’m making really good time on the others during the month. It’s an absurd comedy point-and-click adventure game, but most importantly it’s kinda short. It’s only about 6 hours long according to user submissions at How Long to Beat. With two big AAA games in my lineup this month, I’ll need a shorter one to serve as a palate cleanser.

So there it is. The four games I’ll be trying to tackle in February. I think I have a good mix, even though two of them are point-and-click adventures. I’ve got a little snack-sized game, an episodic game with easy stopping points, a sandbox mayhem generator, and an epic action adventure. I’ll probably be streaming my time with these games when I can on my Twitch channel (or maybe YouTube instead). We’ll see how I did on March 1st!

The premiere of my short film Quality Time is tonight! Watch the trailer below, and below that is the when and where!

Michael can’t stand his roommate, though the issue is almost entirely in Michael’s head. One morning, a chemical emergency happens, trapping them both in one room for about six hours, and trapping Michael in what he sees as his own personal hell. During their hours together, he must (try to) learn to put up with John. In the end, he learns nothing, because it’s more funny that way.

See Quality Time and 19 other short films produced in the last several months!

I’m making a little trip to Home Depot this weekend. I need some lighting. Sure,  I could borrow some from the school, and I still might, but I’d like to have a few on hand for myself. So I’ve been doing some research on what I’ll need to buy. Here are some of the resources I found:

This video is the basic idea I want. It also reminded me of some important things I would probably have forgotten (like extension cords).

This video is a response to the previous one. It’s a little different and gave me a couple other ideas.

I’m undecided about whether I’m going to buy some stands online (depends on the price and whatnot), or if I’ll make one DIY style. I almost want to do the DIY method just because it’s fun to build things!

I’ll be posting about my shopping trip toward the start of next week and sharing everything I picked up!

Long story short, I’m impatient. I don’t like it when I have to wait a long time for my computer to do things. That’s why I set out to build a computer this past December. In this post, I’ll share:

I had three goals in mind while building this computer:

That third one was what created the biggest problem: I owned CS6 for Mac. That meant one thing: I needed to build a Hackintosh.

Goals 1 and 2 work pretty well together: the venn diagram of things that make a good video editing machine and a good gaming rig has a pretty good cross section. That meant the starting point was to start with the hardest part (Hackintosh), and then get the others to work within the restraints presented by Hackintoshing.

One more thing: my goal was to stay right around the $1000 mark. The good news: I was buying the parts in November, which has some of the steepest discounts on computer parts all year.

Knowing that I’d have to work within the constraints of building a Hackintosh, I set out to find parts that work best with that. One of the most trusted and comprehensive sources of information on Hackintoshing is TonyMacX86. The best part is that they publish guides to the most compatible parts every month. The great thing is that Hackintoshing has come a long way and there’s a wide variety of parts you can use. That would be enough, except that those same parts are the best ones for video editing!

Long story short, I just selected the best parts within my budget limitations from the Tonymac list.

I used PC Part Picker to price out and plan the parts.

This was my first time building a computer, and it was a little scary. I was going very slowly when building it because I was so afraid of messing up. The number one thing I’d recommend to people building a computer for the first time is to prepare. Watch tutorials online. Read the manuals (seriously, they are necessary). Preparation is going to make your life much, much easier.